Home » Blog » Who Said All Trawlers Are Slow?

Who Said All Trawlers Are Slow? 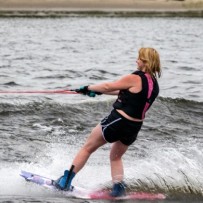 Many trawlers have a reputation for being limited to their displacement speed of around 6-8 knots.  It’s not uncommon to see some trawler owners comment that they had difficulty in strong current, or even that they are frustrated when they get passed by a sailboat.  Not true with Enemy glory.

While I very much enjoy a slow 6-8 knot cruise, I’ve found that strong wind and strong current are not a problem in the slightest — the boat has more than ample speed to make way even against several knots of current.  Indeed, in getting familiar with her, I’ve been able to push her to 18 knots – sometimes slightly better.

When chatting with Paul Tortora of Wilde yachts, he mentioned wanting to find a wake boarder who might be interested in seeing if we could tow a skier behind Enemy Glory.  Not being one to shy away from a quirky idea like that, I put him in touch with some people from the Nipmuc Ski Club in Webster, MA.

That all led to a couple of photo shoots and the rest, as they say, is history!

Below is some footage of us out on the Connecticut River, “tugging” wake boarder Courtney behind Enemy Glory:

I’ll be posting some of the outtakes later – Thanks to Paul Tortora for the photography from both a DJI Phantom drone and GoPro!