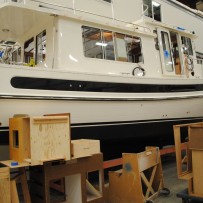 Though I’ve built many things, a boat is not on that list.  In principle, it’s a fairly straightforward thing, however as the size of the vessel increases, so does the complexity.  In a vessel the size of Enemy Glory, construction is a process requiring attention to, thousands of details.

When I committed to Enemy Glory the dealer (Paul Tortora of Wilde Yachts – a great guy!  In fact, everyone at Wilde, and Nordic, has been great to work with) I was told that I’d be receiving regular pictures of the work in progress.  At first I was a bit dismissive about it, it struck me as a bit kitchey, but my thoughts changed when I received the first batch.

Those pictures actually dragged me into the process, and I started anticipating their delivery (some might say demanding delivery).  I wanted to see what was being done and what she looked like at various stages of construction.  There are far more photos that are shown here – these are just the highlights.  In fact, I’ll need to go to Seattle on business and I hope to visit the factory before she leave.  I’ve been promised a thumb drive full of pictures (thanks Cory) which will likely prompt revisions to this page.  I’ll also put together a gallery of selected pictures.

In sorting through my current photos, I’ve divided the basic construction into the hull, deck, and the bonding of hull and deck.  Other photos relate to the interior construction, which is also quite a process.  I’ll sort through those for a future post.

Starting with the hull, it’s a bit of a monster.  Here’s a shot from the bow.  The two fuel tanks are located amidships on the on the port and starboard sides: 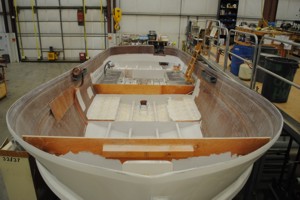 This detail shows the tanks and the channel for the shaft log and shaft:

Here’s the engine awaiting installation.  You’ll note that this is not the Cummins QSB6.7-380 that Is still specified for the NT39.  Apparently, due to delivery time problems with the Cummins, the decision was made to repower the NT39  with the Volvo/Penta D6-370.  According to the factory, Enemy Glory the first of the NT39 hulls that are Volvo-powered: 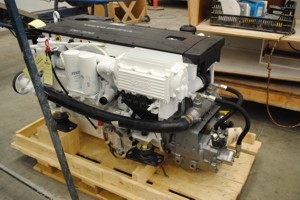 Here is the Volvo D6-370 installed in the hull.  The generator is the white box on the port side: 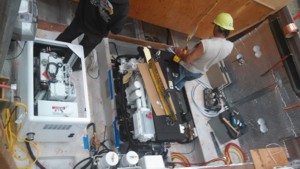 The deck, out of the mold, ready for an interior! 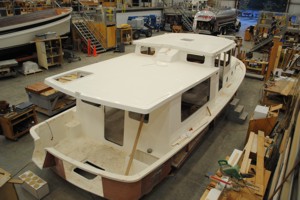 Here’s a shot of the deck with the windows and portions of the interior trim now installed: 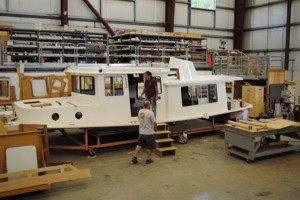 The deck is now bonded to the hull.  While there’s still a lot more to do, Enemy Glory is starting to look like a boat: 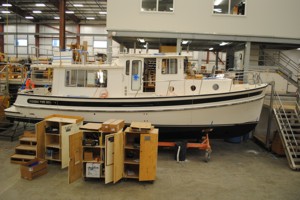 Here’s a shot from about 2 points abaft her starboard quarter: 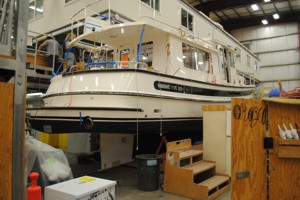 And another from about 3 points ahead of the starboard beam: 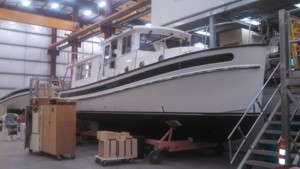