Since we’re planning on some long-range travel on Enemy Glory, I decided to add a marine SSB as well as 2 VHF radios.  SSB in case we’re outside VHF range and two VHFs for convenience (and redundancy).  I also wanted the ability to operate an Amateur (Ham) Radio station from aboard Enemy Glory for those rainy days when we’re just bobbing at anchor someplace.

The effectiveness of an SSB is closely related to the quality of the connection between the “ground” side of the antenna and the water below.  Seawater is about a close to a “perfect” ground as you can get, but connecting to it, unless you have a metal hull (or keel) is tricky.  This ground connection, in antenna terms is called a counterpoise.

In a boat like Enemy Glory, the SSB antenna is only about 16 feet long.  That’s approximately a 1/4 wave antenna at 14MHz, but it will be non-resonant at other frequencies.  Although a 1/4 wave resonant vertical should be a reasonably good match to a 50 Ohm transmitter, at other frequencies, an antenna tuner is required to match the impedance of the non-resonant SSB antenna to the impedance of the radio for maximum power transfer.  At all frequencies a good ground is essential. 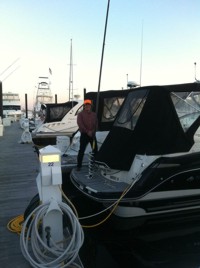 Therein lies the hitch.  It’s often possible to get a good match, even with a marginal counterpoise.  However, that doesn’t mean that the antenna will radiate well – indeed, a dummy load has a perfect match but isn’t supposed to radiate at all!  The secret lies in the resistance to ground of the antenna system.  A good, solid, contact with the seawater ground is generally considered a perfect ground with near zero resistance.  A marginal ground increases the ground resistance and steals power by lowering radiation efficiency.  If the radiation efficiency is high, even a short, non-resonant antenna will do well.

Before embarking on the design of the radio system for Enemy Glory, I performed several experiments with antenna and grounding systems on my Monterrey 260.  The photo shows one of those experiments – a 33 foot telescoping fiberglass mast held a 1/4 wave wire cut for resonance on 7.185 MHz.  The counterpoise consisted of 1/4 wave radials about 6″ above the surface of the water (running along the dock in 4 directions).  Those radials formed the counterpoise for the antenna system.  I varied the number of radials from just a single 1/4 wave radial to a total of four 1/4 wave radials.  In all cases, the match was excellent – no problem loading the antenna through a simple matching network.  However, reducing the number of radials reduced the coupling to ground, increasing ground resistance and reducing radiation efficiency.  The result was a weaker signal. 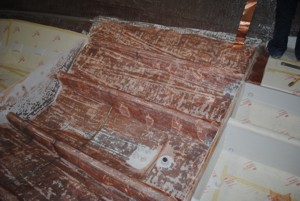 When I committed to Enemy Glory, the deck and the hull were still separate pieces – a perfect opportunity to lay in a proper counterpoise.  I had reviewed a number of options, such as the KISS Counterpoise which appears to have some great marketing, but I rejected those based on my experimental results.  While I think things like the KISS are a great option if your boat is already built, and you need to snake something in as a counterpoise, I think having the luxury of an empty hull makes it less attractive.  (I’ve never seen ground resistance or radiation efficiency data for the KISS counterpoise – if you have some, let me know!).  I’m sure the KISS allows good match, indeed, I had good match by just running two 30′ wires along my hull at waterline, the experimental performance was not as good as several square feet of foil floating on the water.  Since I had an open hull, I opted to have nearly 100 square feet of copper laminated into the hull below waterline.  That copper sheet is bonded to a 4″ copper strap that provides the antenna low impedance ground connection.

Once laid, the counterpoise was glassed over to ensure that the elements could not attack the copper.  Although the copper is inside the hull, this should not represent a problem as the radio 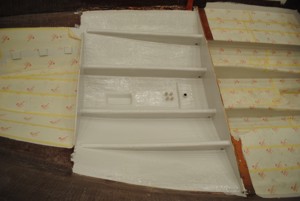 frequency energy will be capacitively coupled to the seawater.  I’d expect some increase in the ground resistance due to the capacitive reactance in the ground system, but the relatively low dielectric constant of the fiberglass hull should make this effect minimal.

I have high hopes that this will work well – I’m eager to start running some tests when Enemy Glory finally gets in the water this Spring!